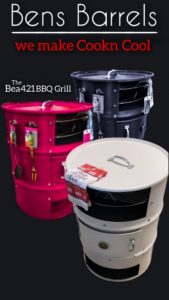 Ben Primis is a multitalented man – from inventor and CEO of Ben’s Barrels to musician, motivational speaker, award-winning artist, and of course, library patron. For those who aren’t familiar with the Ben’s Barrels brand, the Erie-based company sells handcrafted BBQ grills manufactured from USDA food grade approved steel drums, complete with aerodynamic, laser cut 14 gauge 22-inch grill grates, smoking and warming chambers, and wheels and handles for easy maneuverability. Ben’s artistic side shines through in the selection of vibrant, heat-resistant colors available for custom order that set his grills apart from the competition. In addition to grills, Ben’s Barrels also produces products including burn barrels, trash cans, and other concept barrel designs.

According to Ben, the inspiration for his signature Bea421 BBQ Grill first struck him in a dream. “I had a dream of a design in my head. I woke up and drew this grill with half a pencil and no eraser. The more I drew it, the more excited I became, to the point where I couldn’t sleep the rest of the night.” The very next day, Ben took the design to a fabricator and turned his vision into a reality. The product debuted in spring of 2020 at Kraus Department Store on Parade Street – a business that itself has over 100 years of history in Erie – and the Bea421 BBQ Grill has remained an Erie staple ever since.

The library is just one of the tools Ben has used to turn his dream into a reality. Ben has been a patron of the library for 14 years, and has become a familiar face in the Blasco Library’s Internet Lab. When asked what library resources he uses most, he highlighted the copy machines, free Wi-Fi, and public computers complete with Microsoft Office Suite, plus the laminator located in the Idea Lab. Initially, Ben says, he used the Internet Lab primarily to look for jobs, learn about resumes, and put together applications. Now, “I’m creating documents to support my business, support my LLC manufacturing company.”

Ben built his brand from the ground up, often without the resources that many business owners take for granted. According to Ben, “our home became a factory, our basement became an assembly department, our dining room became a finishing department, and our yard became everything else.” An innovator by nature, he has created two custom signs for his business using everything from secondhand LEDs to wooden skids discarded by the warehouse next door. It’s no coincidence that the Bea421 BBQ Grill is named after Ben’s mother, Beatrice, who passed away from pancreatic cancer. As the name would suggest, everything about Ben’s Barrels has been a labor of love.

When asked what advice he would give to aspiring business owners in Erie, Ben repeated the phrase, “Dream Big. Don’t cheat yourself,” and finally, “stay in line and stay out the way.”

To learn more about Ben’s Barrels and find them in local stores, visit him on Facebook and Instagram, or read the brand’s success story on Erie News Now here.